Ladies of the Sea 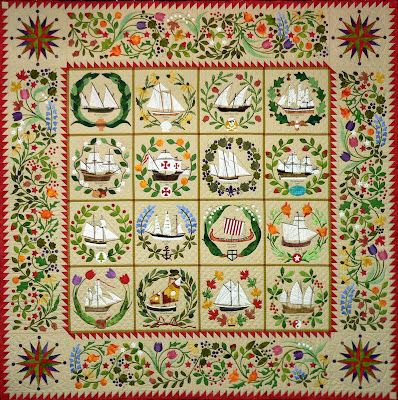 (c)2007 Susan H. Garman
***
The newest block-of-the-month that I created is called "Ladies of the Sea." It celebrates some of the greatest ships that have sailed the oceans of the world. There are 16 blocks with ships appliqued on them - and each ship is surrounded by a wreath of vines, branches, or flowers from the ship's native land. The four borders incorporate all of the flowers and leaves that are in the wreaths -- and each corner of the quilt has a mariner's compass on it. This was a wonderful quilt for me to research -- the patterns each contain the history of the ship and describe the flowers, as well as an "icon" that connects the two halves of the wreaths. The icons again reflect something about the ship or the native land of the ship - for example, The Hannah is one of the ship blocks; it was the first ship in George Washington's navy. Washington chartered the schooner to raid the British ships in order to obtain food and supplies for his struggling army of men. The Hannah is surrounded by cherry branches, representing the famed story of Washington's claim that he never told a lie when his father asked him if he had chopped down a cherry tree. The icon joining the two cherry branches is a circle with a green pine tree on it. The pine tree was on the Hannah's flag, along with the words, "An Appeal to Heaven," a phrase taken a famous address to the British that closed with the words, "Appealing to heaven for the justice of our cause."

I'm particularly pleased with this block-of-the-month -- partly because we haven't seen many new Baltimore album style quilt patterns in a while, but also because I spent a considerable amount of time writing and illustrating the instructions so that even a less experienced quilter could make this quilt. Each month's pattern includes a section called "Smooth Sailing" that provides options for simplifying the pattern. I want quilters to believe that every quilt is "do-able" even if they don't yet have a wealth of experience under their belts.
Check your local quilt shop if you are interested in doing this new block-of-the-month, or you can always get it from Quakertown Quilts (http://www.quakertownquilts.com/) if you want to order it from the shop that manages the distribution of my patterns.
Happy sailing!
Posted by Sue Garman at 9:25 PM