And Even More Antique Quilts!

Hello again -- it's amazing how quickly a month can fly by. Last month I said that I would show you some of the things that I'm working on. I will... but only one quilt this month; hopefully next month you will see a lot of Baltimore album blocks that I have been working on. They're not quite ready for prime time yet, though! Instead... I'll start with a bunch of antique quilts and comments - and then you can take a look at my latest medallion quilt, "Coxcomb Medallion."
First, here is a lovely Carolina Lily quilt. In viewing many antique quilts, I am continually astonished by the creativity of yesteryear's quilters. Look at the borders on this quilt: opposite sides match; adjacent sides do not. And why do you think this quilter chose to put a little block motif (other than the Carolina Lilies) in the top and bottom left corners? Would you have imagined doing something like that? Not me - but then I really like absolute symmetry in quilts like this. do you think she "owed" putting these blocks into this quilt? Who knows?! 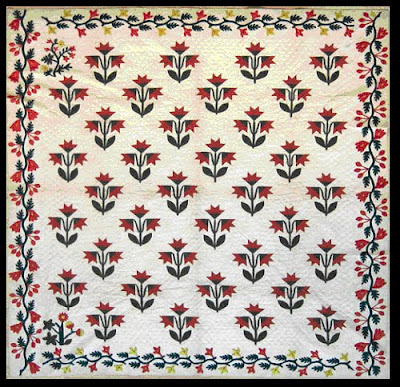 At first glance, this next quilt is a four-block quilt. It's actually a 16-block quilt - set to look like a four-block quilt. Setting blocks like this makes for interesting secondary patterns. Think about that, the next time you are making sets of blocks: can you build another pattern out of the way you set the blocks? 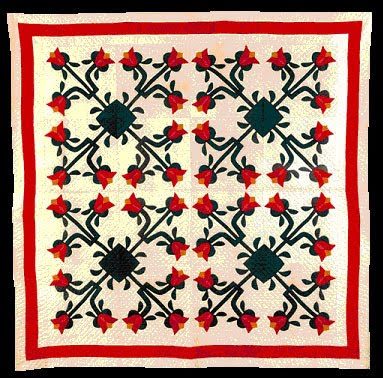 This next quilt is definitely a four-block quilt -- what a delightful motif each block uses! The trailing vine is very primitive and not nearly as complex as the center blocks. Do you think that the quilter was just tired of all that detail and wanted to get the quilt done? I know there are times when I've opted for a simple, plain border just so I could move on to the next new quilt project. 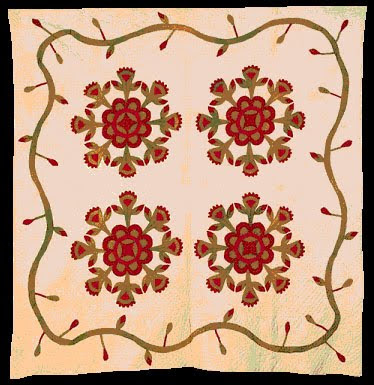 Floral Spray quilt with Trailing Vine, 19th century (78 x 79")
This 9-block quilt looks like it started out as a set of Rose of Sharon blocks but the quilter turned them into peppermint tulips. Don't you just love this kind of creative spirit? It teaches me not to be afraid to try something different. 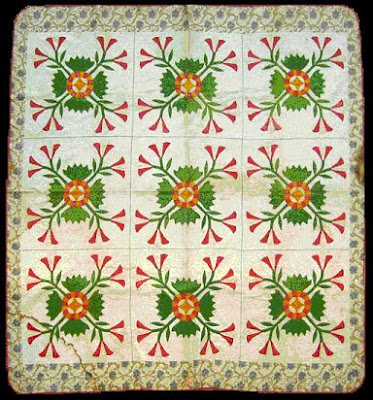 Decorative tulip quilt, 19th century (95 x 99")
Here is another quilt where the quilter went a little wild with her desire to be creative -- look at the different borders she used on each side of the quilt. Interesting, to say the least! 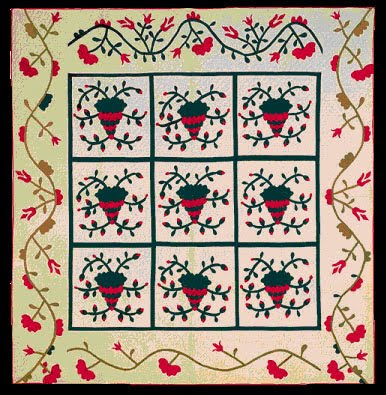 Rose quilt, 19th century (98 x 96")
This Baltimore album quilt was probably a treasured gift for a minister or a bride and groom. Made in 1873, it represented the highest form of quilt art at the time. This quilt sold a year or two ago for around $25,000. 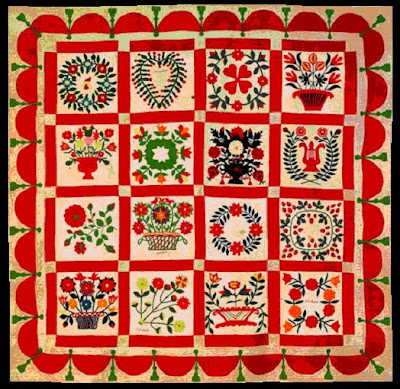 Baltimore Album, 1873 (104 x 101")
I love berries, so I could not resist including this quilt in this set of old quilts. Somebody had a lot of patience -- this quilt was made well before the advent of mylar templates, which have revolutionized berry-making. 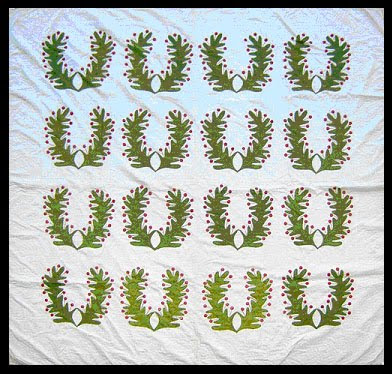 Berry Wreaths, 19th century (89 x 94")
Here is an old log cabin quilt -- I love log cabin quilts that are a bit whimsical -- and this one is, with its use of high-contrast fabrics in the border and in the "light" logs. 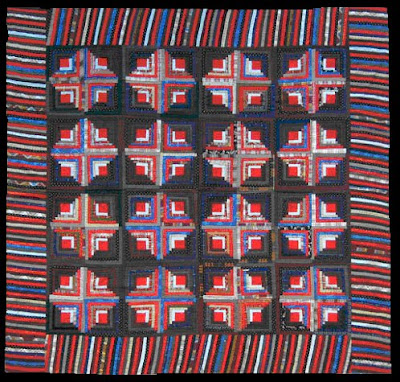 Courthouse Steps log cabin quilt, circa 1900 (77 x 77")
And now here is another log cabin quilt -- it's a bit different because it was done in silk fabrics and includes a ruffled border. It was made for a youth -- what a delight! 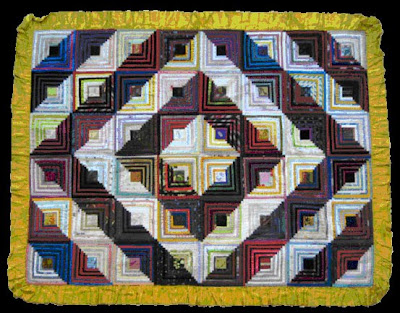 Youth log cabin quilt, 1893 (65 x 54")
This next quilt is one that I have always wanted to reproduce -- a simple alphabet quilt. It was made in Pennsylvania in 1917 by Addie Heipler Allen. This era saw quite a few alphabet quilts - I particularly love the use of cheddar in these quilts. 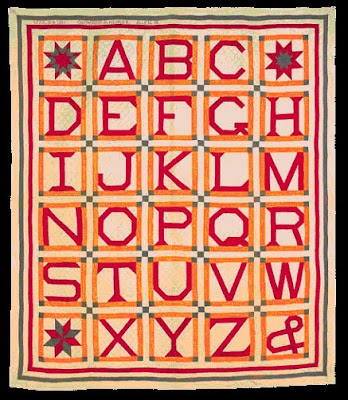 Alphabet Quilt, 1917 (90 x 78")
The next two quilts are whimsical folk art renditions. I liked putting them together because they both contain animal motifs -- the first one has roosters and cats, and the second one has cats. Cute, aren't they? 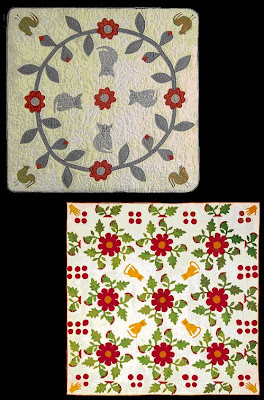 Crib quilt, 1900 (32.5 x 34")
Trapunto quilt, 19th century (90 x 90")
Last but not least, here is my "Coxcomb Medallion" quilt. I decided early on in the design process that I wanted to have a double swag border -- but I wanted to put it in the interior of the quilt, rather than as an outer border. I like how it breaks the path of the eye and highlights the central portion of the quilt. This is a block-of-the-month that will be sold (retail and wholesale) through Quakertown Quilts in my hometown of Friendswood, Texas. 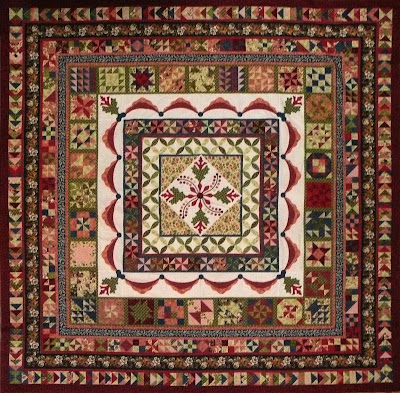 That's all for this month -- I hope to see you again in another month. Until then, happy sewing!