Yes, I've been working away this month, trying to finish a new quilt... and finish some old ones... and finish some blocks... and help a couple friends finish their work... phew!   I'm almost out of breath! Except I'm not... because I relaxed at a guild retreat this past weekend, which explains why I'm late (again) posting on the first of the month.  So here goes... a lot of different things, but I hope you enjoy them and learn at least one new thing.  Let's get started!

I co-chaired my guild's retreat (www.lakeviewquiltersguild.org) this past weekend and we had a great time working on projects and sharing friendship.  Members of other guilds sometimes attend - and members of the Island Quilters Guild were working on their new raffle quilt.  It was a beautiful Judy Niemeyer quilt, with phenomenal machine quilting done by Marcia Henry.  It was a quilt that simply glowed as we oohed and aahed over it!  And it is the perfect raffle quilt -- it will draw people to it, ready to open their wallets and buy some tickets. 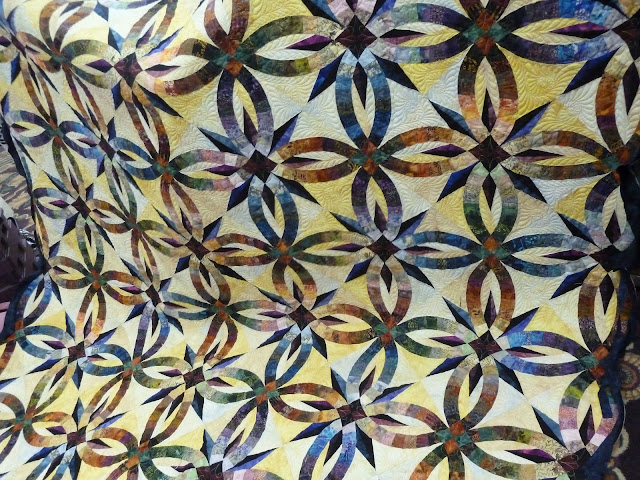 And here's a close-up of Marcia's wonderful quilting. 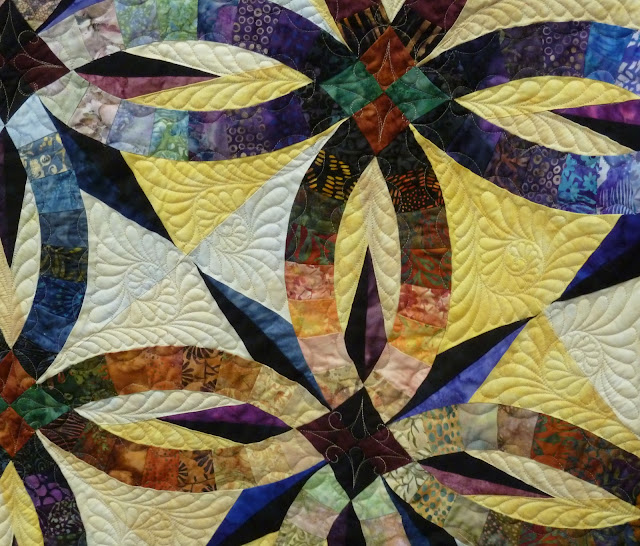 Last Fall, I participated in a Secret Sister exchange, and gave my secret sister blocks each month for 3 months.  At the retreat, she put them all together; take a look at JoAnn's quilt.  Now, I want to make more of those blocks and put together a quilt for myself.  I love how JoAnn set the blocks on point -- it's not a setting that most of us intuitively choose to use, and even if we do, we don't always use print fabrics in the setting triangles.  Good job, JoAnn! 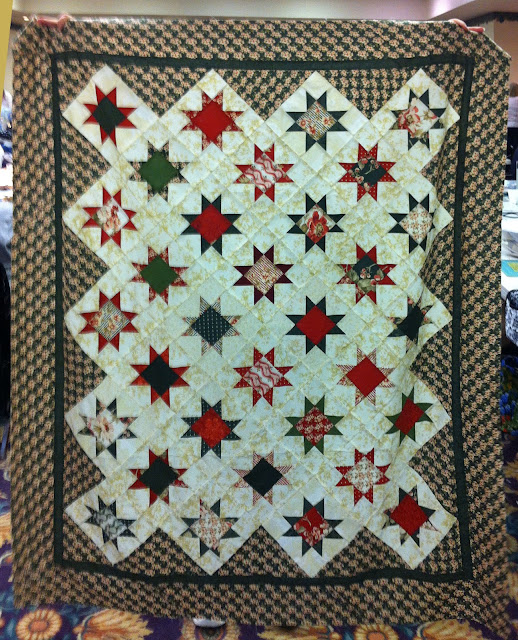 One of the things that happens at retreats is you get to see others working on their projects - and they inspire everyone.  Here's a quilt with baskets -- you can probably see how simple they were to assemble -- I love blocks like this!  What is not obvious is that the basket handles were made of bias strips that were machine appliqued in place, making assembly even easier!  My friend Mary Jo was working on this quilt.... 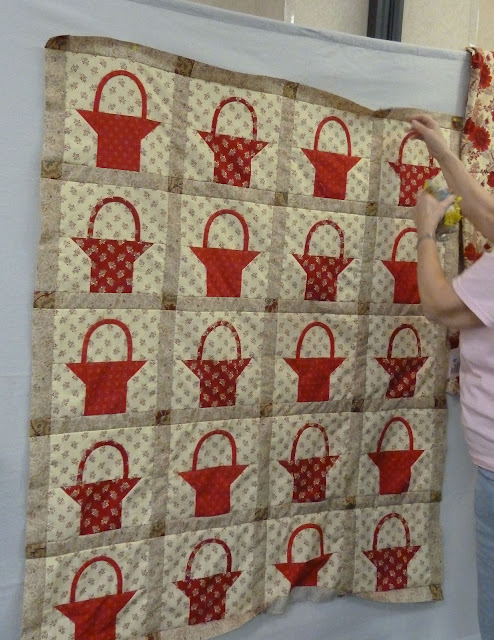 ...while her friend was working on this set of pink baskets.  I love the border print she plans to use: 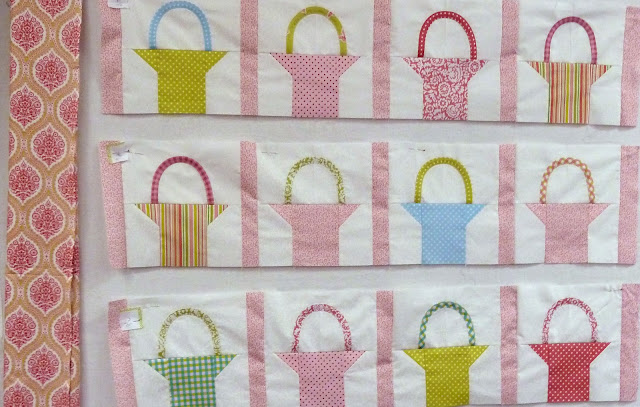 In the meantime, my friend Cynthia was assembling her triple four-patch blocks into a large bed-sized quilt.  She had several leftover blocks, and a bunch of leftover four-patch squares.  She gave them to me... and after I came home on Sunday, I started making blocks from the 4-patch squares and adding them to the set of finished blocks.  I still have more 4-patches to assemble into blocks; when I'm done, all of these blocks will go into my guild's annual auction.  I'm chairing it this year, so I'm always on the lookout for items to add to the auction, which funds many of our guild's monthly programs. 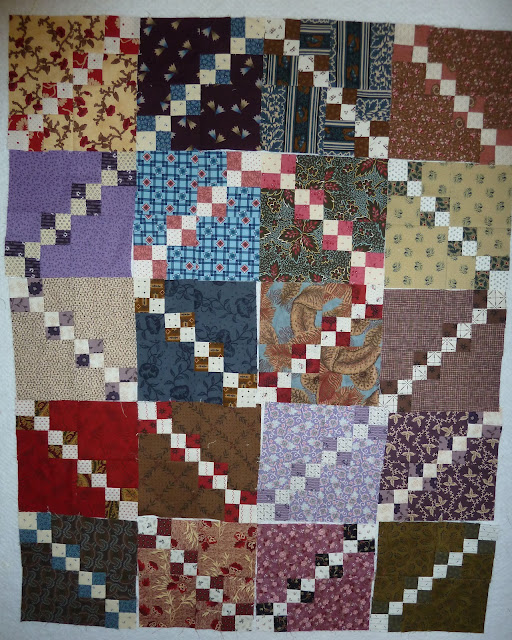 While putting those blocks together, I also worked on my Block-of-the-Week blocks (but I'm making 7 of each block pattern, so it's really a block-of-the-day!).  Here are four of the latest... and a stack of the remaining units.  I like paper piecing, so I generally take every pieced block and draw up a paper foundation for it... you can see my stack has the pre-cut fabric and foundations, ready to sew together.  I have all the remaining block-of-the-week blocks ready to sew, and just need to find the time to get them done.  Don't you love how the same block can look so different based on fabric choices?  Part of what I love about making all these blocks is the fact that they are chewing through my scrap pile! 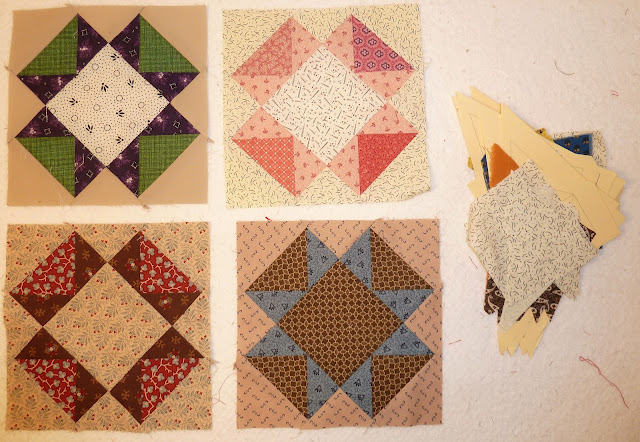 My guild's quilt show is coming up in May, so a lot of us are getting quilts finished or ready to be quilted.  One of my friends travels a lot and knew she would not have time to quilt her quilt.  I volunteered to quilt her quilt, as she's done plenty of favors for me.  Here is Cynthia's round robin quilt -- I loved quilting this quilt, even though there wasn't a lot of opportunity to do anything fancy in the open areas, as there weren't any!  I love this quilt -- how can 6 women, independently, do such wonderful designs and make such a gorgeous quilt?  It happens! 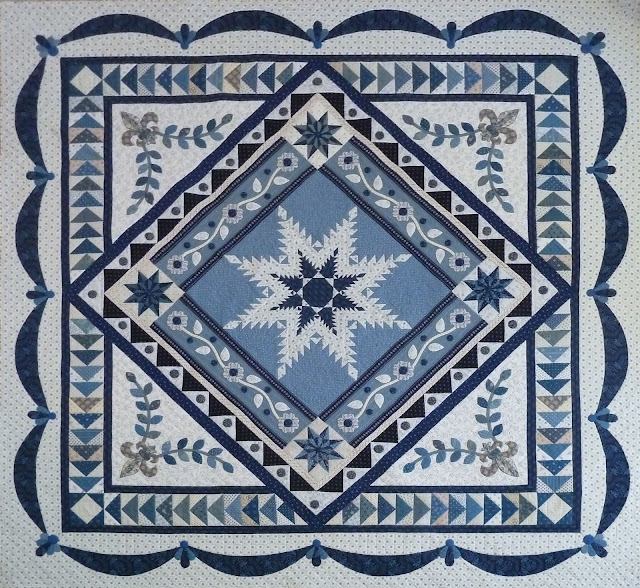 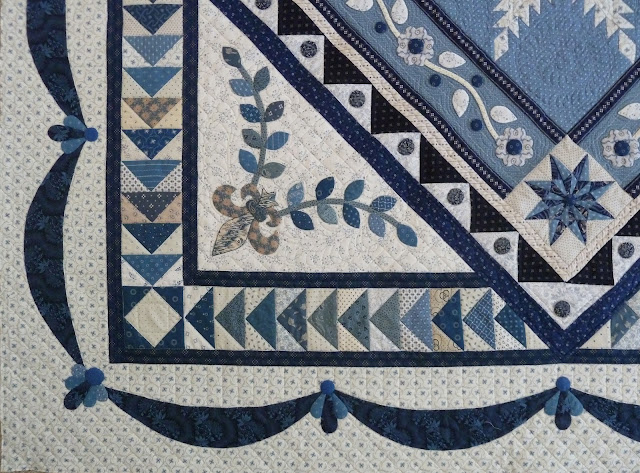 I also finished quilting my own round robin quilt.  What a lucky gal I am, to have such talented friends!  Actually, they are talented, but mostly, I think that round robins inspire all of us to stretch ourselves to come up with exceptional additions. 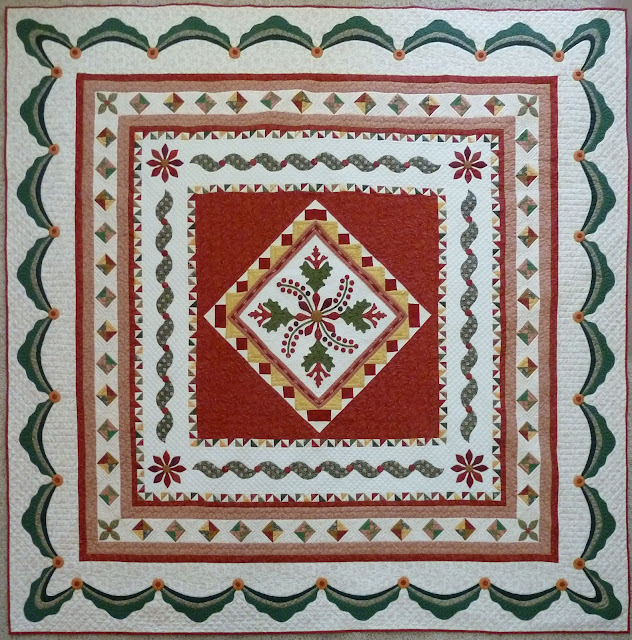 In this quilt, I did 1/2-inch diagonal cross-hatching in the interior border -- I love how "neat" it looks in a quilt! 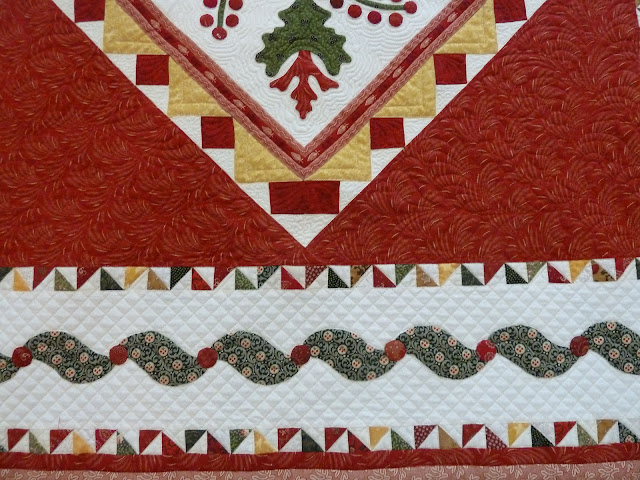 And here's a close-up of the outer border -- again, I used straight line quilting inside the swag border and 1-inch diagonal cross-hatching outside the swags. 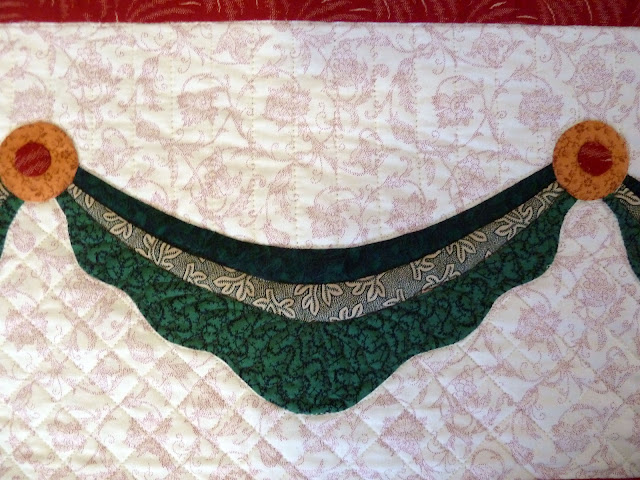 In a couple of months, I will post pictures of all of the finished quilts that were involved in this round robin series -- they will be in my guild's quilt show in May.

Okay -- here's a picture of an antique quilt -- a Princess Feather quilt.  When I first saw it, I knew I had to make one.  It was just so bright and colorful! 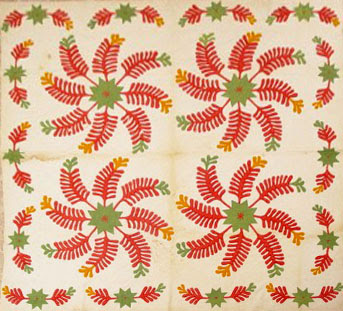 I started making this quilt about 7 years ago.  It was always my "take-along" applique project until I finally finished the applique on it.  Then it sat around for two years while I debated what borders or sashing to put on the quilt.  I opted for no sashing and several plain border stripes, as I wanted a space where I could insert a wonderful quilted border design.  The photo doesn't do the quilt justice -- you can see all the wrinkles and miss the dynamic look of the quilt in the photo, but all of this will look great once the quilt is quilted.  I'll work on quilting this quilt sometime in the next month.  Or two.  No sense pushing myself too hard, right?! 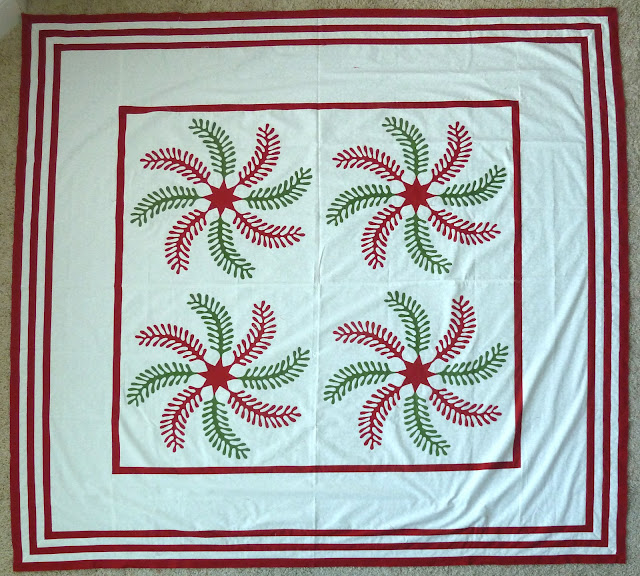 And here is the new block-of-the-month that I have been working on.  I changed the design once I finished piecing four of a planned five feathered star blocks; after laying the quilt out on the floor with all of those pieced and applique blocks, it just looked way, way too busy.  So... I removed the feathered star blocks and when I assemble this quilt, I will put some nifty quilting in the empty block areas below.  I had to rearrange the blocks after I removed the feathered stars, which meant that I needed a ninth applique block -- that's it in the lower left corner.  I still have a lot of applique left to do in the setting triangles.  This quilt is going to be called Bed of Roses. 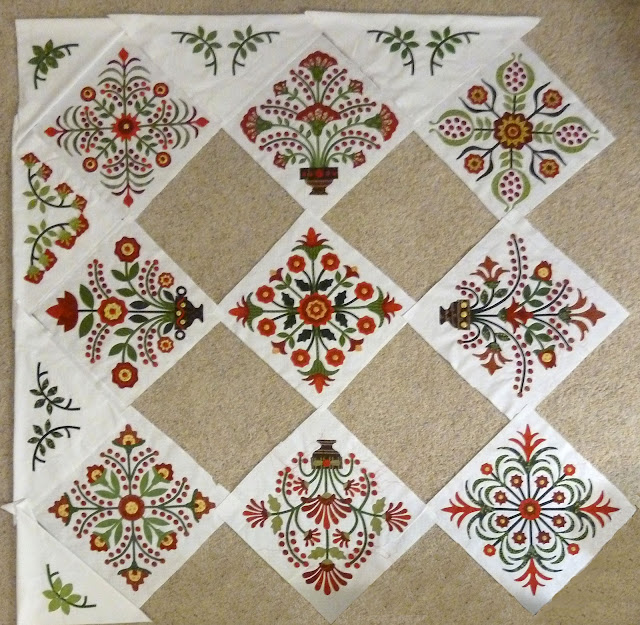 Here's a close-up of what the setting triangles will look like -- this is the only one that I have finished appliquing, out of all of them.  Sigh... so much to sew, so little time... 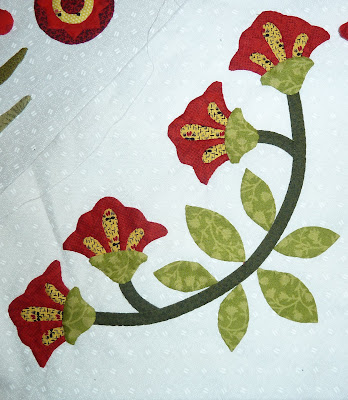 Okay, now for a little departure and example of the process I use for designing and making quilts.  Below is a picture of a quilt made by Serena Tucker in 1853, for her own marriage.  The photo was in the book Quilts in Community:  Ohio's Traditions -- 19th and 20th Century Quilts, Quiltmakers, and Traditions by Ricky Clark, George Kneper, and Ellice Ronsheim.  In one of my bees, we decided to give ourselves a little challenge:  take the tulip vase block in this quilt and reproduce it... in whatever format each person wanted:  make it bigger, smaller, different colors, or whatever other modification came to mind.  I love these kinds of challenges because I know I will see so many different thought processes at work. 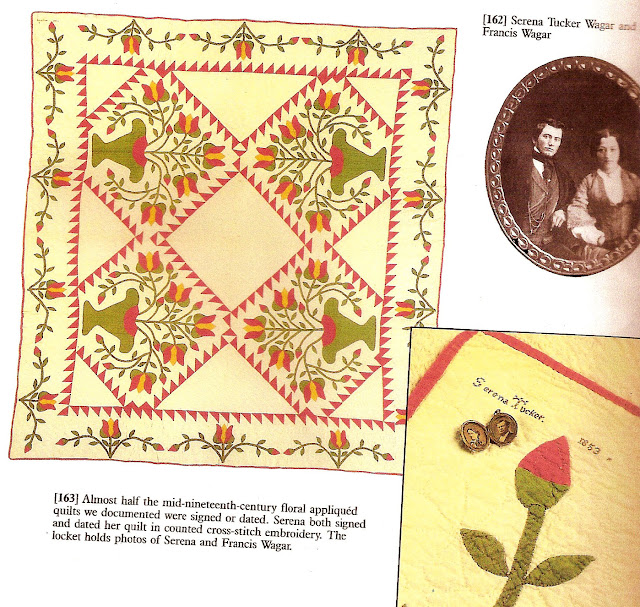 So what is my thought process?  I thought you'd never ask!  First, I drew a pattern of the block for the participating bee members.  Take a look; it's a pretty simple 12-inch block. 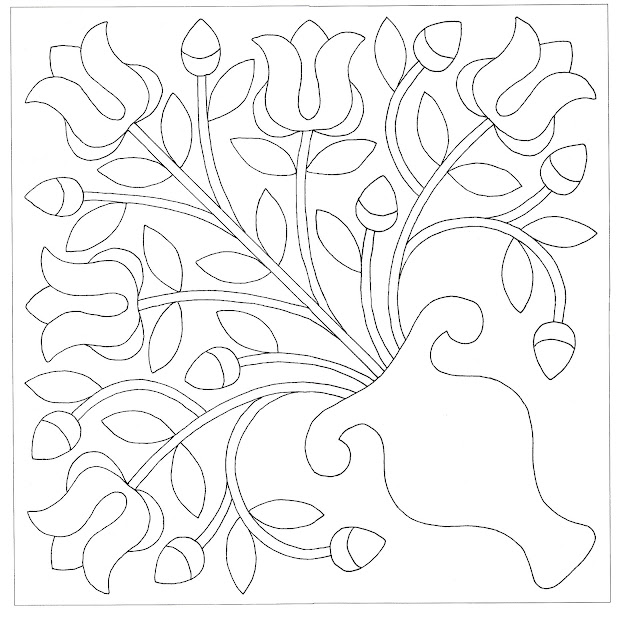 But then... I had to figure out what I wanted to do with my own version of this block.  The first thing I did was to try out various combinations of colors, using Adobe Photoshop.  Here's  design using greens and reds and golds.... 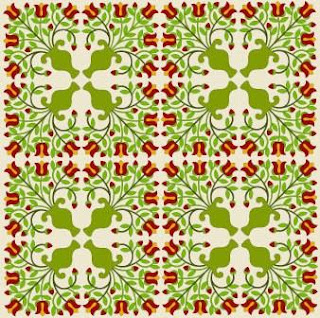 And here's another one, using a gradation of pink to red shades for the flowers....  I was drawn to this version because I felt like it was quite unique and with the right combination of fabrics for the vases, there would almost be a "glow" to the quilt when it was done. 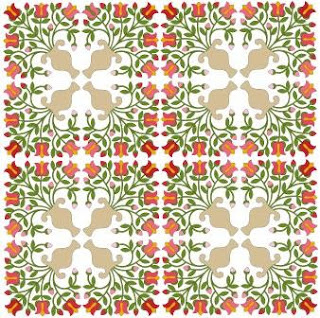 But I realized that with sixteen 12-inch blocks, I would have to do a LOT of applique and I would end up with just a 48-inch square quilt.  Hmmm.  You know I love applique but this might be a little bit of overkill!  So I put my thinking cap on and decided that maybe I only wanted to make a four-block quilt -- less applique, right?  And then I decided that I should consider fabric I had always wanted to use:  cheddar and teal -- it was used often in quilts in the 1800s.  So I made a mock-up of that fantasized version.... 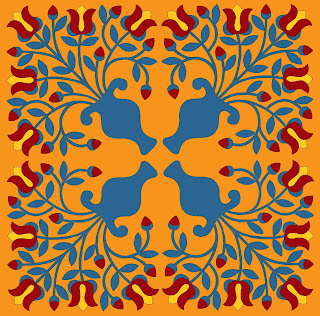 But... really, with only four 12-inch blocks, will I really be happy with a finished 24-inch square quilt?  I like bed-sized quilts.  Or at least large lap quilts.  So I thought... hmmm...   why not enlarge the pattern and make the blocks 36 inches square?  Yes!  That's the ticket!  I put that little 12-inch pattern on my printer and enlarged it, bit by bit, in 16 different sections... so here's the 36-inch pattern, all taped together from the enlarged sections.  Yeah - four of THESE babies will make a NICE sized quilt, once some outer borders are added! 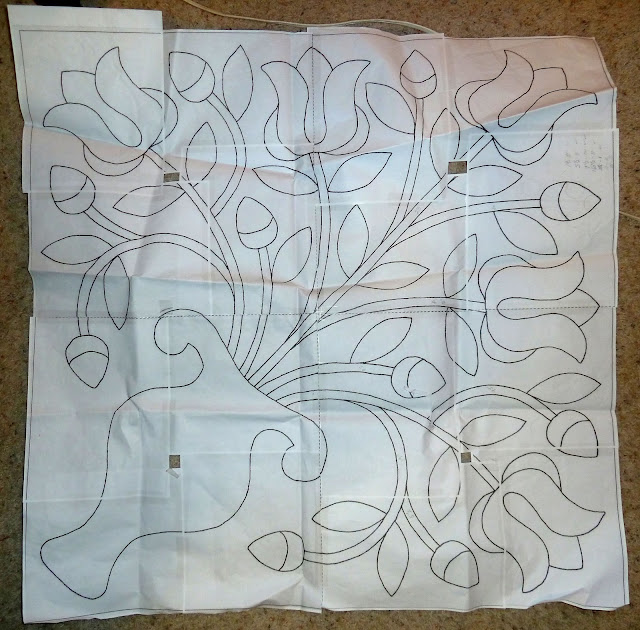 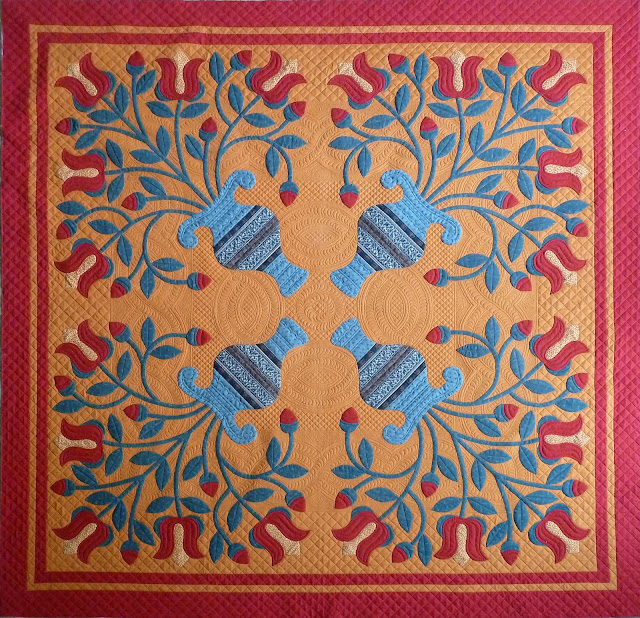 I hope you learned something by watching how my thought process worked.  It always involves just a little bit of experimenting, tweaking, imagining, and trial-and-error before the final design pops out of nothingness!  We had about ten gals each make their own version of the Serena Tucker blocks -- and I cannot wait to show you the results.  The quilts will hang in my guild's quilt show in May - I'll post photos after that, and you won't believe the variety!


Next month I hope to show you the finished Bed of Roses quilt... my fingers are crossed!  And maybe something else will be finished by then, too.  I never know what will sneaky little project will crawl out of my UFO trunk, calling my name and begging to be finished!