It's All About ANIMALS!!!

This month, I seem to have misplaced my battery that goes with my new camera... and my camera that goes with my old battery pack. What's a gal to do? Well... not take pictures, that's for sure. Rather than waste another day hunting down the missing culprits, I am going to go ahead and 1) post pictures for your wandering eyes (along with a few comments I have about realistic pictoral quilts) and 2) tell you what I've been working on this month.

What better way to start off a picture foray than with some cattle? Texas is known for its longhorns - and though these are not longhorns, they are still beauties! I want to point out that most pictoral quilts leave a rather plain background (save for a few hills) - yet this brave quilter managed to incorporate a wonderfully complex background by giving you illusions of trees with foliage and branches - that are complex without being extremely detailed. I know that many of us (myself included) often forego illusion in attempts to be very detailed. There's a lesson here in simplicity... 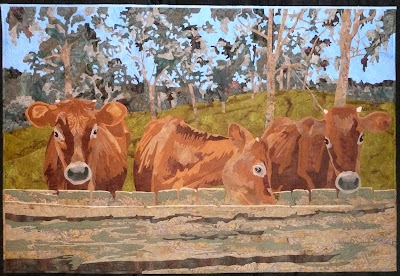 The Girls of Tyrone Farm was made by Beth Miller based on a montage of three photographs taken on Tyrone Farm on the south coast of Australia.
Native Americans are one of Denise Havlan's favorite subjects. In her original design, Moonlit Mirage, she sees a mirage of what used to be. Notice the wonderful binding on this quilt -- it picks up the colors of the work therein, and holds it all together very nicely. I love this next quilt - but what animal does it represent? Aaaahhh... but of course! It's a "river of bats cascading across the sky," according to Vivian Mahlab of Austin, Texas. Anyone who has seen the bats fly out from under the bridge in Austin where they nest wil recognize the breathtaking view! Vivian's view, though, is called Bat Tide - Annadale, Texas - so perhaps these bats are from another part of Texas! 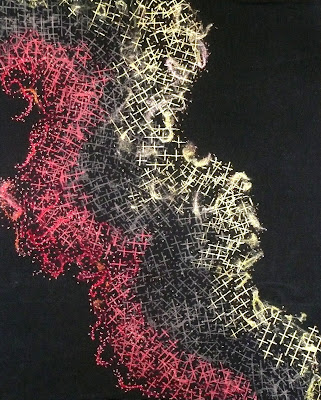 Inge Mardal and Steen Hougs, from Chantilly France, are well-known for their realism in quiltmaking. In Angling, they illustrate "the meditative qualities of angling." 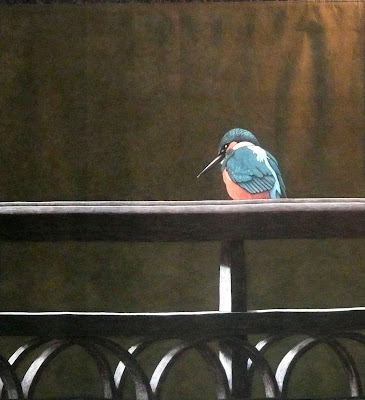 If you live where grackles reside, you may or may not appreciate the next quilt. Grackles tend to congregate in very large groups - in Texas, they are usually in populated areas where there are phone lines and trees juxtaposed - and they emit raucous cries that are not the most pleasant. In Return of the Grackle, Diane Rusin Doran of Glenelg, Maryland, displays her view, saying, "each year, as we slog through the remnants of February, I search for signs of spring. Some people look for robins, but I look for the grackles. Their brash iridescent exuberance tells me that spring is surely near. This digital collage contains numerous photographs and a painting." What I love about Diane's quilt is it's freshness -- and the evidence of a grackle arriving with a fierce announcement of spring! 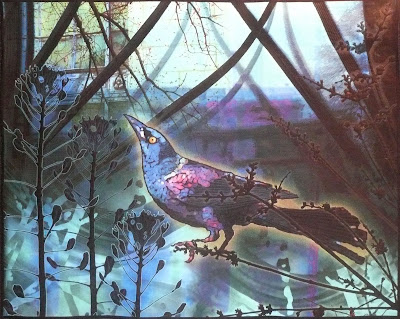 Pictoral quilts often include the American icon: a bald eagle. Here, Rosalie Baker of Davenport, Iowa, shows us an eagle soaring above the Mississippi River in the Quad City area. I truly appreciate the fact that Rosalie made this quilt only after getting permission fromm the photographer, Ron Hodgson, who snapped the photo of the eagle as seen in Where Eagles Soar. Respecting copyrights is so important to all of us who express ourselves through art. 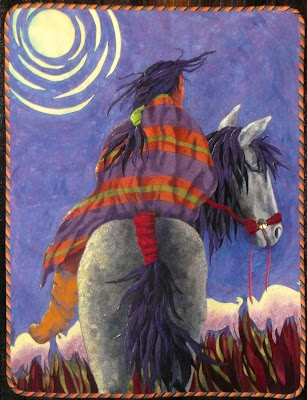 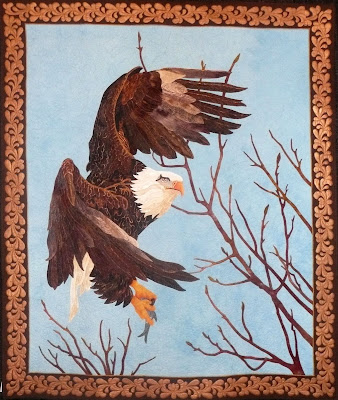 In Wind Racer, Cassandra Williams (Grants Pass, Oregon) whose us a horse "struggling to escape the violent storm pursuing him. Could this be the horse's nightmare?" Cassandra has used cotton and lame in her original design -- and the lame sparkles against the dark sky. What a great use of embellishment! 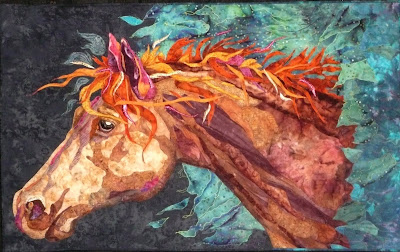 Joanne Baeth of Bonanza, Oregon, shows us some sandhill cranes in Sunset and Sandhill Cranes. She says they actually fly over her house every morning and evening on the way to the fields and wetlands. The barns in teh quilt are what she sees out the window of her sewing room - her own special world of beauty. Sandhill cranes are lovely birds - they also live on Galveston, and I love seeing them when they arrive on the island, with their clucking calls and gentle beauty. 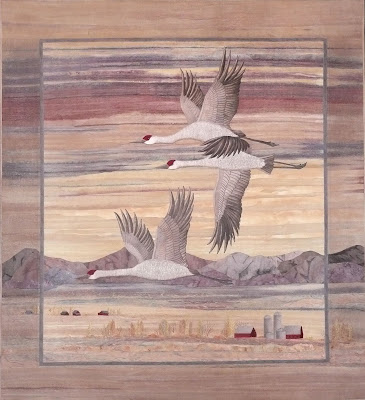 This quilt, by Diane Steffen of Lake Ozark, Missouri, is really a two-quilt work called Rare Catch - note that the background is pieced in strips. It's nice to see that kind of subtle designwork inserted behind realistic pictoral quilts. According to Diane, "blue lobsters are very rare genetic anomalies and their color is an extraordinary cobalt blue. They are a one-in-5-million occurrence..." I like when we know what the maker says about her quilts! 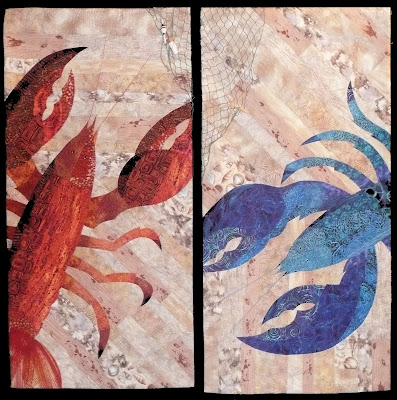 In Ruffled Feathers, Roxanne Nelson of Calgary, Alberta, Canada, reflects her love of birds, color, and quilting. She sees fabric as paint, using it as a pallet wherein she blends fabrics perfectly, with each fabric "stitched to match the texture of the feathers." Her quilt was inspired by a photography taken by Gayle Reeder. Please note on this quilt that Roxanne very carefully appliqued her pieces and did not resort to digitally printing or painting her feathered friend. We can all learn a lot from experts like Roxanne. Her quilt is also on the cover, with an article, in this month's AQS magazine. 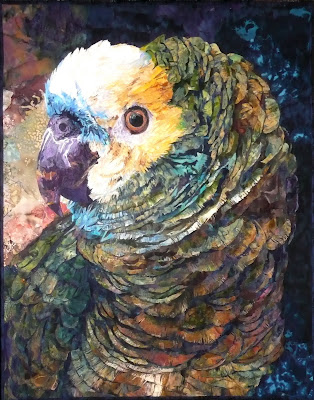 Here's another quilt; it is called Punda Milia and was designed and made by Pat Drennan of Albuquerque, New Mexico.  It was featured in Gail Garber's book Flying Colors (C&T Publishers, 2010).  Look at the zebra's stripes. Many of them are actually long feathered geese strips. What a novel way to use geometric piecing in a pictoral quilt! Ideas like this are what often sparks creativity in someone else's next quilt. 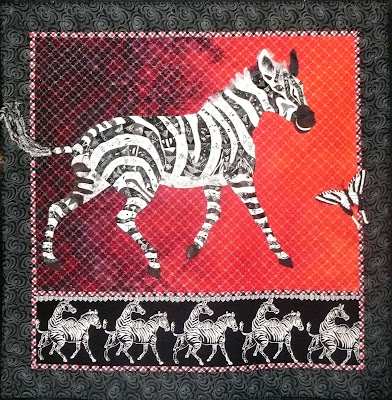 And here is another zebra, Wild Stripes, made by Melanie Marr of Houston, Texas. She was inspired to make it, based on a photo she took of a zebra at the Brownsville Zoo in South Texas. Melanie chose the background color to add intensity to the quilt - which it most definitely does! 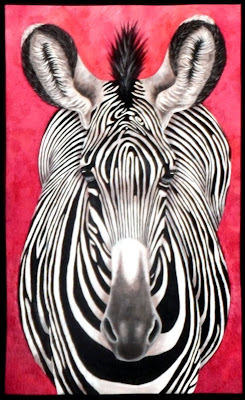 This little owl is a cutie. Ruth Bloomfield of Atherton, Queensland, Australia, calls it Waiting for Dinner. What I want to point out on this quilt is that the owl and branch are made mostly from scraps sewn together, while the background is a busy batik print -- an overall stippling gives the background a wonderful leafiness, though! In addition, having leaves on the branch extend across the inner border gives the quilt some really nice dimension. 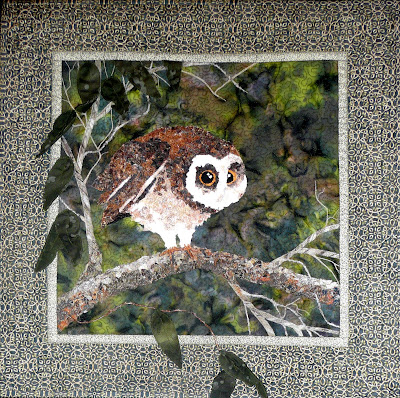 I love pictoral quilts like the one below - you can almost feel the emotion in the dog as it trots along in Run! by Hiroko Miyama of Tokyo, Japan. What a great quilt! 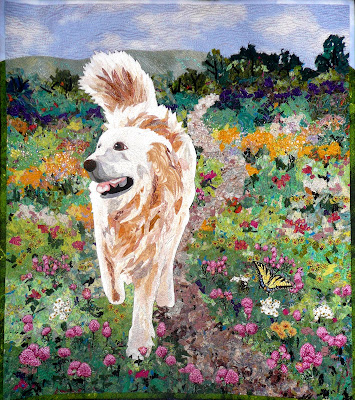 Here is another quilt with intense emotion in it - the tiger's eyes burn right through you! This quilt, below, was made by Patt Blair of Mt. Baldy, California. Patt is an accomplished teacher, author, and award-winning quilt artist. We can see why in her Tiger Eyes.

Now here is yet another "animal" - Our Divine Miss Beetle by Sonia Grasvik of Seattle, Washington. The wonderful beadwork makes the beetle sparkle - and the lovely quilting in the background makes the quilt just "sing!" 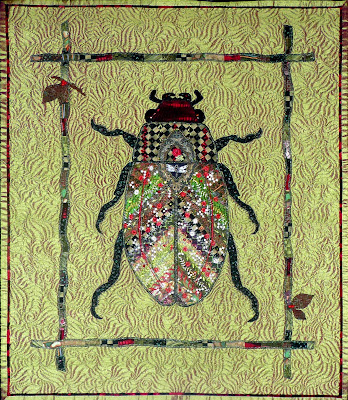 In Let's All Spring Forward by Rosalie Baker of Davenport, Iowa, we see red-eyed tree frongs from the rain forests of Central America "where spring is eternal." These frogs are often used to promote the cause of saving the world's rainforests - even though they sometimes have a comical air about them because of their coloration and funky looks. Rosalie has done a great job of capturing them in their habitat. 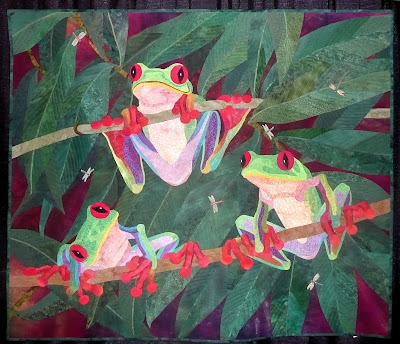 Last but not least is SHH! She's Sleeping by Barbara McKie of Lyme, Connecticutt. She saw these seagulls watching a sleeping baby sea lion and managed to make it a quilt using disperse dyes, trapunto, free motion emboridery, and free-motion machine applique. Barbara is obviously a student of many different facets of the art quilt world, and a master of many! Take a look at the quilt - and the close-up below. 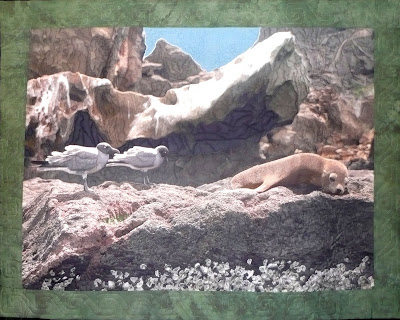 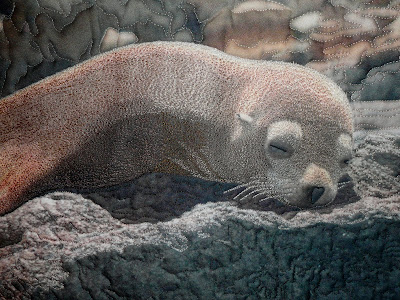 That's all I have in terms of photos this month. Next month I will show you what I've been working on, assuming that I find either a camera battery (new) or camera (old)! I'm on block ten of a 36-block red and white applique quilt. Once you see it, you will probably recognize that it is based on an old 1847 quilt you have seen - one that sold for $8,812 in 2010. That's enough information to tantalize your mind... I'm also working on quilting my Borrowed Roses quilt (the pattern is now available at Quakertown Quilts!). Quakertown closed one of its retail outlets, but it is still alive and well and doing a booming internet and wholesale business at www.quakertownquilts.com. I will confess that they are my distributor, of course!


So... until next month, when I catch up a bit and show you more, I hope you are having a great summer!