Sew Much to Write About!

I know, I know… it’s been awhile.  Somehow, time escapes me during the busy holiday season and my priorities get all discombobulated!  Let’s see… where to begin?  I think I’ll start with a quilt that I actually finished, including even getting the binding stitched down!  By the way, speaking of binding, if you ever need some really great step-by-step instructions, check the April 2015 entry for this blog.  Mom really spelled it out nicely.  I actually have a printed copy that I keep near my machine for reference whenever I’m working on a binding.


So, the quilt.  Last time I posted, I showed a photo of the Bezels All-In-One club pattern called Bezels from Joyce Lundrigan.  I finished it!  The quilting is really spectacular… thank you, Joyce!  I learn so much with her quilting patterns and they’re so versatile.  I’ve used them on other quilts quite a few times already. 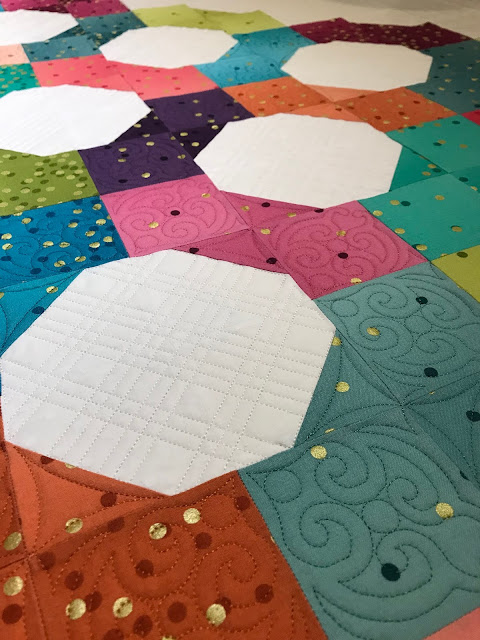 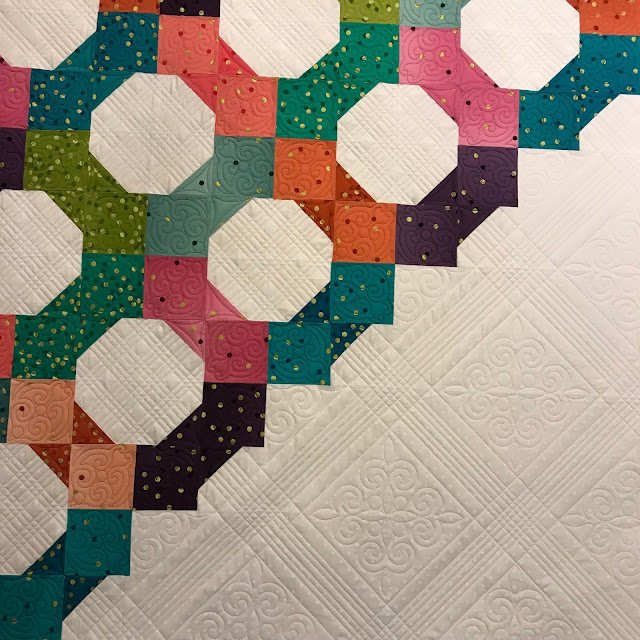 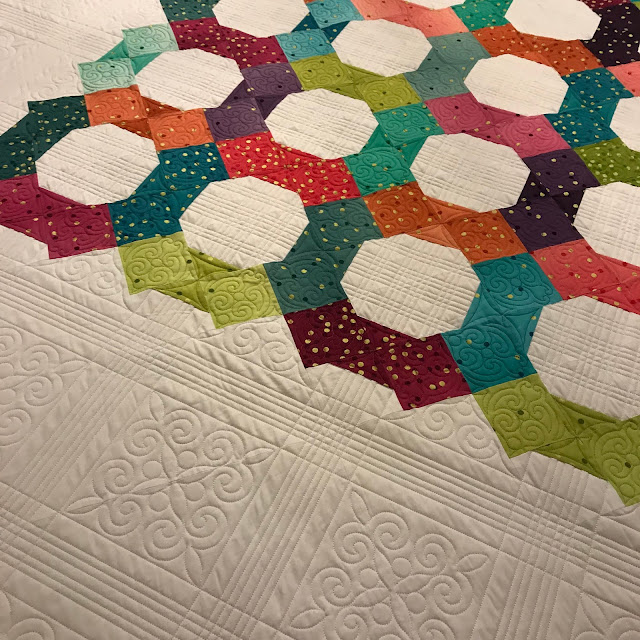 Another thank you to Joyce, and to JoAnn Knight, for their new Skill Builders club.  It’s a monthly club where you focus on learning (or sharpening) some of your techniques using the Gammill Statler.  I went crazy with the first one, which was to make some super cute winter pillows.  Seriously, I’ve made six of the darned things so far and I have fabric and pillow forms to make more for myself and a few more friends!  I used minkee fabric for the red pillows with a white jersey for the lettering and snowflakes.  The grey fabric is still super soft, but more of a velvet or velour feel (and much easier to trim on!).  These were really pretty quick to make, really luxurious and expensive feeling, and fantastic gifts! 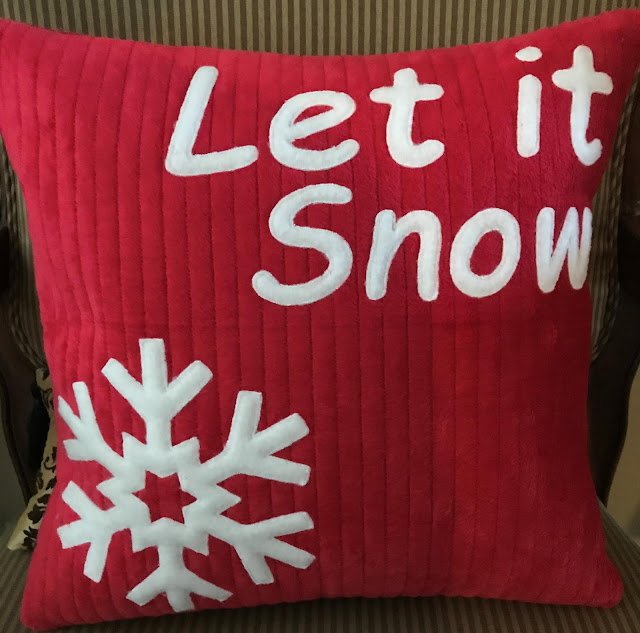 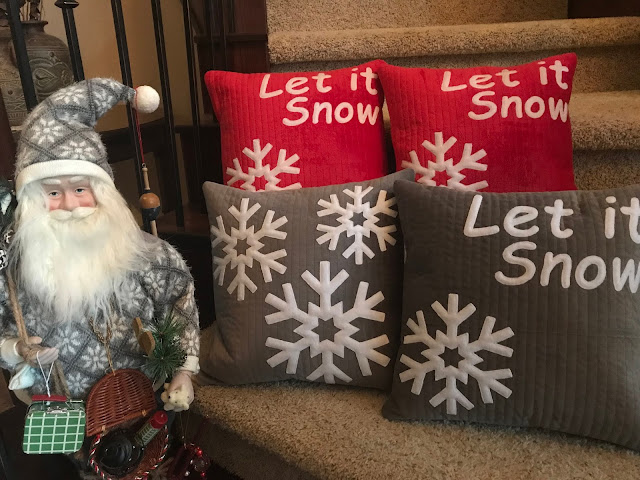 A smaller project that I completed was a block for LakeviewQuilters Guild’s raffle quilt for next year.  It’s going to be absolutely gorgeous when it’s complete!  It’s a medallion quilt with gorgeous fabrics, the pattern roughly based on Stars for a New Day, but with the pieced block border replaced by applique blocks from Afternoon Delight.  That’s where I come in… I picked up one of the block kits from the committee to make my contribution for getting it done.  So cute!

A top that I finished but haven’t gotten to quilting yet is a mini Storm at Sea.  I’ve always liked the pattern and how it has so much movement and looks so curved, yet there’s nothing but straight stitches.  So, I picked up a laser cut kit from Flynn Quilt Frame Company at Festival last year.  I actually started it almost immediately when I got home, but realized that I needed to hold off a few months before finishing it… I’ve been told by my quilting friends that it’s against quilter law to finish something that you purchase at Festival too quickly.  Hahaha!  I did clear it with them and make sure that three months was long enough. 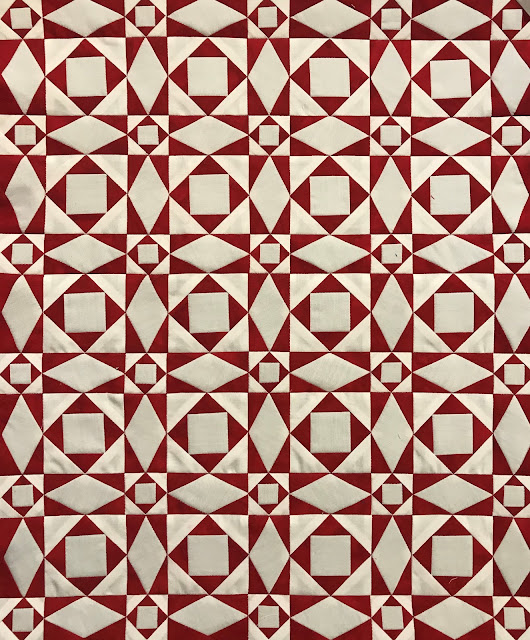 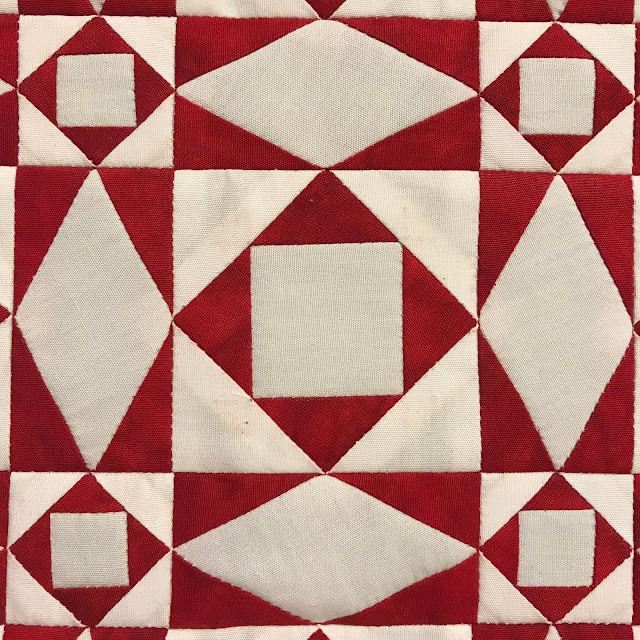 In non-actual-stitching news, I’ve got a couple of lovely (and very fashionable) braces on my right arm for at least another week.  My elbow had been bothering me for awhile, just feeling kind of achy in that little dimple thing (that’s the technical term for it) on the outside.  I went to my favorite orthopedic doc and he said I basically have tennis elbow… braces and anti-inflammatory drugs for a couple of months and I should be good as new.  I have no idea what triggered it… it’s can’t possibly be too much quilting.  Right??? 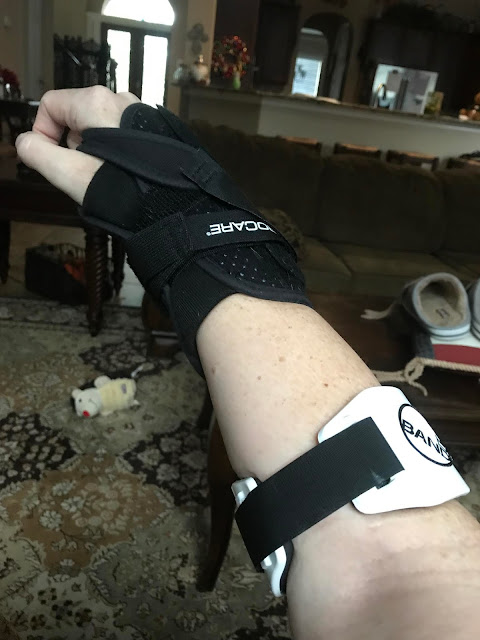 I picked up a new beauty for house a couple of weeks ago… not sure yet if it will be functional or just a decoration.  A friend of mine texted me a photo from an estate sale she was browsing through, and I immediately texted back, “Get it!  I’ll pay you back!”  So, I am now the owner of a 1926 Singer sewing machine.  It needs some love and care, but it sure does look nice just as it is, too.  If anyone has a suggestion for places to take it for refurbishing, please let me know! 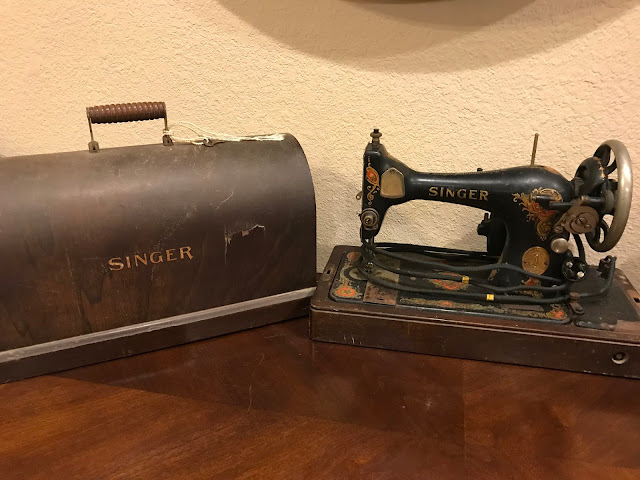 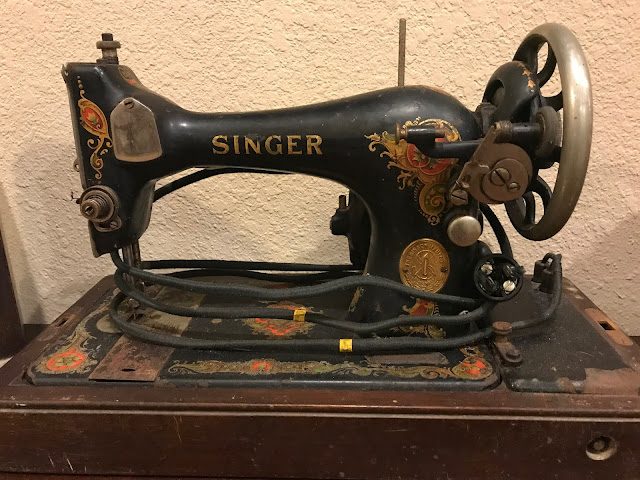 Last, but not least, I’ve got a special kind of quilt loaded on the longarm right now.  This will be in the guild’s annual auction in August this year.  The 9-patches were Mom’s from an exchange she did years ago.  She had given them to our friend, Becky, a few years ago to do with as she pleased.  Becky put them together with alternating squares and added the border, then gave it to me to quilt.  The original pattern had hourglasses instead of squares… I like this better.  It also had some applique flowers and vines (very simple ones) on the border, but I’m putting on the beautiful quilted border of feathers and piano keys from Joyce Lundrigan.  It’ll be a pretty one when it’s all done. 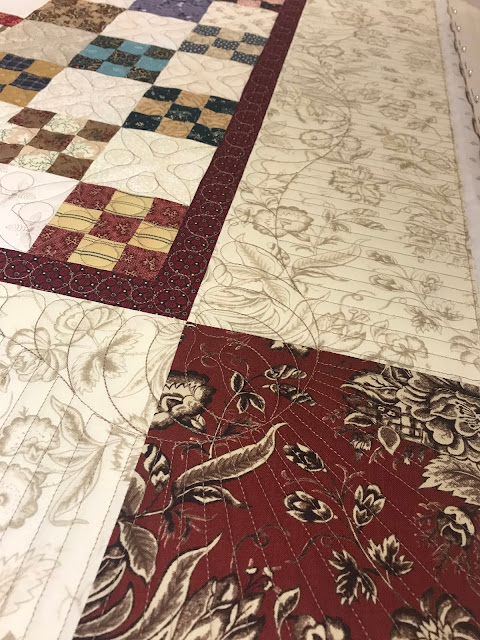 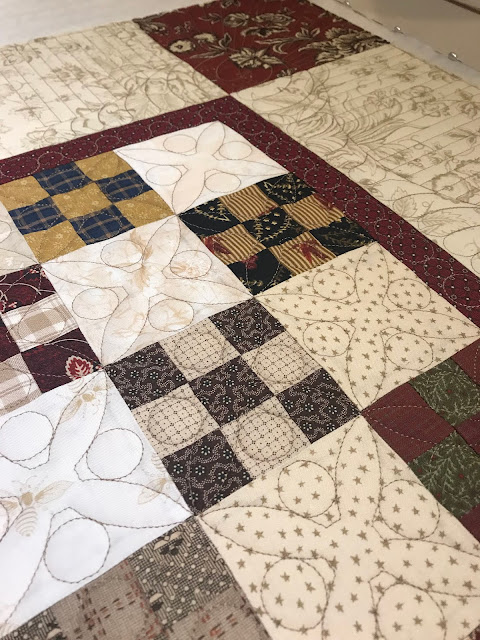 That’s about it for now.  I’ll see y’all next month!